[Harper's Magazine]
FREE SPEECH ZONE
Another scene from the 2008 DNC 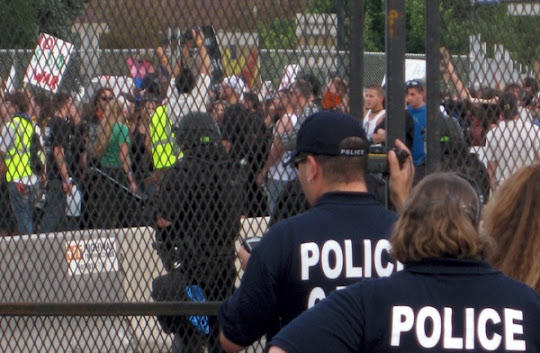 I was making my way onto the convention grounds late Wednesday afternoon when I saw an unusually large congregation of black-clad riot police. I noticed as well that a technician had set up a TV camera such that it faced away from the “security zone” and onto the public street—in fact, just past the gates through which I had entered. I asked the technician what was happening and he said that there was going to be a riot.

The rumor was that the rock band Rage Against the Machine had just finished a performance and then suggested to its 9,000 audience members that they all leave the concert together and march over to the convention. Another man, in army pants and carefully-tucked-in Hawaiian shirt, probably a reporter, closed his cell phone and said with some excitement that the marchers were just a few blocks away. I decided to wait and see what would happen.

By then a second phalanx of riot police had coalesced and other reporters passing through the gates had begun to take notice. We all looked outward. The marchers were believed to be heading down Speer Boulevard, the very street on which we ourselves happened to be standing. Between us and them was a chest-high steel mesh barrier. There were more rumors: The marchers planned to rush the fence; they wanted to incite a police riot; they had stockpiled bags of their own urine to throw at delegates. The reporters waited.

A tall officer in sunglasses told us, politely, that he might have to ask us to move away from the perimeter. A photographer wondered aloud about how to get up higher for a better shot, and another cameraman offered to boost him onto a stoplight, an offer the first photographer declined. “I don’t think the cops would like that,” he said. Other cameramen lounged in lawn chairs atop their satellite trucks, like picnickers before the Battle of Bull Run.

Now no one was allowed to leave, not until more was understood about the potential danger. The riot police created a new security zone by stringing yellow police tape in a line parallel to the outer barrier but set back fifty yards. As promised, the polite officer asked us to step behind the line, for our own safety.

A bucket-lift carrying two elaborately shielded men approached the mesh barrier, as did an armored truck encrusted with an even-more-elaborate hydraulic platform system, atop of which rode another six-man riot squad. A Secret Service man sped to the rear in a golf cart. It was like the flurry of cranes before a freighter pulled into dock.

The protestors came into sight. I could make out a banner, held aloft by two men with flagstaffs, reading “No War on Iran.” More reporters made more cell phone calls. The leaders of the march, it turned out, were veterans of the Iraq war. There were hundreds of them, or dozens, or none. They were followed by all 9,000 members of the Rage Against the Machine audience, or maybe 3,000, or 5,000. The marchers, we heard, filled the entire boulevard for seven full blocks.

And then, before anything could be confirmed, the marchers turned south. They had been persuaded, we learned from the tall officer, to demonstrate lawfully, and lawful demonstration required that they march another full mile, all the way down to the other end of the security zone, and conclude their protest in what the event organizers called the Free Speech Zone. This was a cage between the security zone and the public zone in which protesters were invited to demonstrate their concerns to the gathered delegates of the Democratic Party.

The police pulled the tape back up and the crowd of reporters dispersed, most of them having given up on the prospect of a riot. Bill Clinton would be speaking soon, and it would take fifteen minutes to walk through the vast security zone, from the entrance to the inner security zone where the actual convention was being held, and another thirty minutes to wait in line to have their laptops X-rayed. No more time for protesters.

I wanted to see what would happen at the Free Speech Zone from the inside, but that meant I would have to wait in line as well. I ended up standing next to a lanky, graying reporter whose security badge indicated he was from USA Today. I asked him if anyone had ever used the Free Speech Zone. He didn’t think so. But he had heard that the final location of the Zone was the result of considerable wrangling. The original location was almost completely inaccessible, and local activists had managed to ensure that the new location would be at least somewhat more visible.

This may have been the case, but the new location did not seem to be much of an improvement. I asked several volunteers if they knew where it was located, and none of them did. I finally found it myself by following some riot police to the edge of the security zone.

The Free Speech Zone, it turned out, looked liked the caged-in playground of a 1970’s-era housing project. It was made of the same kind of mesh barriers as the rest of the perimeter, only the barriers were much taller—maybe ten feet—and they had been doubled into parallel walls about four feet apart, like the twin battlements atop a medieval castle. To the right of this cage, which was about the size of three tennis courts, was a large gate, currently sealed. On one side were two dozen riot police, quite relaxed. On the other, just barely in view, the marchers. No one was in the cage. I asked one of the officers what was going on, and he said they refused to enter.

It did seem futile. No delegates were anywhere to be seen. I was the only reporter there. Bill Clinton was about to speak. One young man with a press badge hanging from his neck did approach, but it turned out that he was simply trying to get to the Circle K convenience mart that had the misfortune of being located in the restricted zone. He wanted cigarettes, and so he decided to wait out the demonstration.

I learned later, from a review of the show in the Denver Post, that Rage Against the Machine guitarist Tom Morello had called for a non-violent march to end the war. “We’re going right now,” he had said. “We’ll meet you outside.” Also present, according to the Post, was Ron Kovick, the Vietnam veteran who had written Born on the Fourth of July, who said to the audience, “We will bring the troops home, and we will do this nonviolently, in the spirit of Martin Luther King and Nelson Mandela.”

A volunteer driving a trash cart paused to consider the situation. His youth and shaggy demeanor suggested that he might be on the side of anarchy and/or peace, but in fact he was disdainful. He looked at the meandering crowd and said, “All of them should go out and try making some money and then do something.” Then he drove off.

The protesters, for their part, seemed completely defeated. Someone had set up a microphone at a podium inside the cage and the protesters were invited inside to make speeches. I tried to listen, but I was kept so far back by the police that I couldn’t make out any of the words. The tone of the speeches became rambling, though, and at one point someone launched into a poor take on “You’ve Lost That Lovin’ Feeling.”

Things were falling apart. Two giant men wearing corrections officer badges and biker mustaches ambled by. I asked if the protest was over and one of them said he thought so. I asked what happened. The other one said he wasn’t sure, but he had heard that the organizers and the police had finally struck a bargain, involving bottled water and free passes on the light rail.

And that was all that happened. At the beginning of this non-riot, however, I did overhear the following exchange between one of the reporters, who happened to be wearing a loud sports coat, and one of the black-clad riot officers—an exchange, I promise you, that was entirely sincere.

Riot Officer: So do you.

Riot Officer: Hey, I have that exact same jacket! ■