[Harper's Magazine]
BLOOD FOR OIL!
The only justification that makes sense

We have occupied Iraq for more than a year now, in a campaign that has killed thousands of Iraqis and more than eight hundred Americans. The occupation has cost at least $187 billion, riven the NATO alliance, and provided the enemies of civilization an unprecedented locus of malevolent energy. Most of the world protested the invasion, few Iraqis support the occupation, and even Americans are beginning to doubt their nation’s course. Yet for all the great expense of this war, it is decreasingly clear what it was meant to achieve. 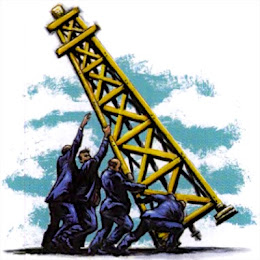 As the promised “regime change” has congealed into reality, its public purpose has become fluid, ungraspable. When one objective has proved nonsensical or politically inexpedient, another has emerged from the CNN ether to replace it. Secretary of State Colin Powell informed the United Nations that war was the only means by which that institution’s credibility could be maintained. Yet when the Security Council declined to endorse this position, its opinion was dismissed as irrelevant. George Bush told Americans that Iraq was a “grave and gathering threat” not just to the Middle East but to the homeland itself. Yet when we discovered that Saddam Hussein had no anthrax and no unmanned aerial vehicles with which to deliver it, the President, together with a crowd of enthusiastic nation builders from across the political spectrum, changed the subject to “freedom.” Now even sovereignty, which is the essence of freedom, is no longer an objective in any meaningful sense, as Powell made clear in April when he said that “we are giving sovereignty so that sovereignty can be used to say, ‘We invite you to remain.’’’

Given such locutions, one can forgive conspiracists for understanding the occupation in darker terms. We hear that Halliburton is behind it all. That the big oil companies think they can somehow make more money in Iraq under a U.S. occupation than they did under a Baathist kleptocracy. That the invasion was designed to prop up Israel. And yet these theories, too, make little sense. It seems unlikely that U.S. oil companies would prefer an unruly Islamic democracy, let alone a war zone, to a stable authoritarian regime. Halliburton’s stock price, though up since the start of the war, is still at just over half its historic high in 2000. As for Israel, it’s hard to fathom the administration spending hundreds of billions of dollars to aid that troubled state purely out of personal or even eschatological conviction.

As justification after justification has fallen away, nothing of any real value to Americans remains in Iraq besides the oil itself, nearly a ninth of the world’s proven reserves. Without that oil, all that remains is a terrifying landscape of sand and soldiers with nothing to fight for but their own existence. Although our desire for Iraqi oil may seem a distasteful explanation for war, it is the only explanation by which we may continue to believe that we live in a rational universe. Put another way: if this war is not about oil, then truly we stand poised at the abyss.

Oil is perhaps the only justification for the war that the administration has consistently refused to avow, as in June 2003 when Deputy Secretary of Defense Paul Wolfowitz reminded reporters that “the notion that the war was ever about oil is a complete piece of nonsense,” or when Donald Rumsfeld explained to the Hoover Institution in February 2003 that the approaching war “does not relate to oil. I mean, it just plain doesn’t.” And yet there is ample cause to hope that here, again, the administration is lying to us. We consume 25 percent of the world’s oil and produce only 8 percent of it. Changing that ratio would require radically reinventing the U.S. economy, an option no president has ever presented to his people. Maintaining that ratio, on the other hand, not only keeps the economy growing; it keeps Americans happy. This may not be the best part of what democracy is about, but neither is it an undemocratic goal. “Oil, enough oil, within our certain grasp seemed ardently necessary to greatness and independence in the twentieth century,” wrote the economist Herbert Feis in 1946, when it was becoming clear that the United States would soon be unable to produce from within its own borders all the oil it required. Ever since then, the story of the Middle East has been the story of one president after another attempting to maintain that “certain grasp.”

One might hope that the market could sort out our ability to purchase oil, but, in fact, the sheer physicality of the business – all those vulnerable oil fields and pipelines and storage tanks in hostile neighborhoods – combined with our absolute dependence on the product means that the flow of oil is determined as much by political action as by market forces. This was the lesson of the 1973 Arab oil embargo, which not only traumatized the American economy and introduced the phrase “the oil weapon” into the nightmares of American politicians but also saw Iraq nationalizing Exxon’s and Mobil’s shares in the Basrah Petroleum Company and plans being made in the White House for an invasion of Saudi Arabia. Henry Kissinger described the proper balance of market forces and military forces to BusinessWeek just after the embargo was lifted. “It is one thing to use it in the case of a dispute over price,” he said of military force. “It’s another where there’s some actual strangulation of the industrialized world.” Business contracts are fine, but they are never enough. As Feis wrote presciently, “American interests must have actual physical control of, or at the very least assured access to, adequate and properly located source of supply.”

In fact, our preferred method of assuring access to Gulf oil has been to “guarantee the sovereignty” of some oil-producing nation, thereby allowing us to treat any threat to the oil system as a threat to a state, which provides a useful political framework for our financial transactions. The history of American client states is well known. Harry Truman promised King Ibn Saud of Saudi Arabia – one of the largest producers of oil on earth then and now – that no threat to its sovereignty “could occur which would not be a matter of immediate concern to the United States.” Dwight Eisenhower expanded the pledge. “Our country supports without reservation the full sovereignty and independence of each and every nation of the Middle East,” he said, and would back it with the full force of the U.S. military.

Jimmy Carter was more forthright about our interest in the region. After noting, in his final State of the Union address, “the overwhelming dependence of the Western democracies on oil supplies from the Middle East,” he put forth what is now called the Carter Doctrine: “An attempt by any outside force to gain control of the Persian Gulf region will be regarded as an assault on the vital interests of the United States of America, and such an assault will be repelled by any means necessary, including military force.”

The Carter Doctrine is nonpartisan, and although the whole enterprise of premising U.S. security on access to foreign oil may be unwise, within the context of that goal it has been highly effective. It is our current President’s father, in fact, who most famously acted upon that doctrine, when Saddam Hussein moved from “friend” to dangerous aggressor by invading Kuwait, which itself possesses a tenth of the world’s proven reserves. Dick Cheney, then the secretary of defense, was able to sum up the situation quite clearly just after that brief and successful war. Saddam “was clearly in a position to dictate the future of worldwide energy policy, and that gave him a stranglehold on our economy and on that of most other nations of the world as well.” We stopped him, and the oil flowed for another decade, among the most prosperous in U.S. history.

If we view the current occupation through the lens of fifty years of U.S. policy, we can begin to construct a rationale for war that is not charming but at least has the benefit of coherence. Our best client state, Saudi Arabia, is in danger of collapsing under the weight of a thousand fattened princes, and our friendship is further troubled by the fact that fifteen of its citizens killed nearly 3,000 of ours. Moreover, as is clear from the previous writings of Cheney and Rumsfeld, this administration sees China, Russia, and the European Union as potential superpower rivals on the order of the old Soviet Union. The three of them together have oil contracts pending in Iraq worth as much as $1.1 trillion. Those contracts will go into effect the moment the U.N. lifts its sanctions regime, giving our rivals unprecedented control over our economic health. What would seem to most observers to be a series of positive developments – the normalization of Iraqi politics, the privatization of the Iraqi oil business, the imminent collapse of a corrupt Saudi regime – is instead seen as a distinct threat to our “certain grasp” on the oil so vital to our “greatness and independence.” And so we must invade Iraq in order to ensure continued U.S. control over the flow of Middle East oil.

Although it would be unfair to ascribe such a provocative move to the doctrine of Jimmy Carter, the invasion of a territory in order to control its natural resources is a rational, albeit morally questionable, exercise with successful historical precedents (the founding of the United States, for example). And yet the current administration finds itself incapable of making its case. If indeed this war is about oil, though, then in many ways the most dangerous thing we could do is insist that it is not. As Army Colonel Paul Hughes, who was the first director of strategic planning for the Iraq war, told the Washington Post in May, “Unless we ensure that we have coherency in our policy, we will lose strategically.”