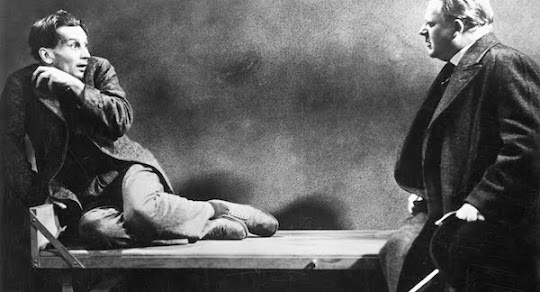 The Testament of Dr. Mabuse, directed by Fritz Lang

Terror, like ecstasy, tends to magnify perceptions. Just as affection becomes adoration in the physical act of love, so too does vigilance sometimes become morbid obsession in the face of spectacular violence. To be effective, this normal function of survival must also be temporary. It is now more than two years since our own national incident of spectacular violence, however, and although the United States remains obsessed, it is not unfair, or even insensitive, to begin considering the events of September 11 from a more detached perspective.

In 2001, terrorists killed 2,978 people in the United States, including the five killed by anthrax. In that same year, according to the Centers for Disease Control, heart disease killed 700,142 Americans and cancer 553,768; various accidents claimed 101,537 lives, suicide 30,622, and homicide, not including the attacks, another 17,330. As President Bush pointed out in January, no one has been killed by terrorists on American soil since then. Neither, according to the FBI, was anyone killed here by terrorists in 2000. In 1999, the number was one. In 1998, it was three. In 1997, zero. Even using 2001 as a baseline, the actuarial tables would suggest that our concern about terror mortality ought to be on the order of our concern about fatal workplace injuries (5,431 deaths) or drowning (3,247). To recognize this is not to dishonor the loss to the families of those people killed by terrorists, but neither should their anguish eclipse that of the families of children who died in their infancy that year (27,801). Every death has its horrors.

Anti-terrorism nevertheless has become the animating principle of nearly every aspect of American public policy. We have launched two major military engagements in its name. It informs how we fund scientific research, whose steel or textiles we buy, who may enter or leave the country, and how we sort our mail. It has shaped the structure of the Justice Department and the fates of 180,000 government employees now in the service of the Department of Homeland Security. Nearly every presidential speech touches on terrorism, and, according to the White House, we can look forward to spending at least $50 billion per year on “homeland defense” until the end of time.

Is any of this necessary? One of the remarkable things about September 11 is that there was no follow-up—no shopping malls were firebombed, no bridges destroyed, no power plants assaulted. This is, no doubt, partly the result of our post-2001 obsession with preventing just such disasters. We must at least consider the possibility, however, that this also represents a lack of wherewithal on the part of would-be terrorists. Although there may be no shortage of those angry enough to commit an act of violence against the United States, few among them possess the training, the financing, or the sheer ambition necessary to execute an operation as elaborate as that of September 11. The nineteen who have already done so are dead, and in the two and a half years that they have enjoyed their martyrdom and their virgins, few have stepped forward to join them. In the United States, none have.

This may be because it is very hard to kill thousands of people at once. It turns out, for example, that the radioactive “dirty bombs” of Jose Padilla’s fantasies are in fact “not very effective as a means of causing fatalities,” according to Richard Meserve, who is the chairman of the federal Nuclear Regulatory Commission. Smallpox was eradicated from nature in 1978, is impossible to manufacture, and—if terrorists did somehow get hold of what little of the virus remains in Russian and U.S. hands—is exceedingly difficult to spread. It is safe to assume that many aspiring terrorists have killed only themselves, with prematurely dispersed sarin or perhaps an all-too-successful anthrax experiment. And contrary to their designation as “weapons of mass destruction,” anthrax and sarin, as well as mustard gas, VX, tabun, and a host of other high-tech horrors, are more accurately called simply “weapons.” Aum Shinrikyo—which had 65,000 members worldwide, $1.4 billion in assets, and a secret weapons lab run by scientists recruited from Japan’s best universities, and spent years underground during which no investigative body knew of them, much less was seeking them—managed to kill sixteen people in a Tokyo subway station. A boy with a machine gun could have done worse.

Real nuclear weapons, of course, are a different matter, but they also are incredibly hard to make. Libya recently gave up on the project. North Korea has been at it since the late sixties and may now have as many as two. As for the much-feared loose Russian nukes, Aum Shinrikyo, with all its money, tried just after the Berlin Wall fell to buy one and failed. This is why Al Qaeda, despite all its well-financed malice, used planes. It was the best they could do.

In the unlikely event that a terrorist organization did manage to steal or, more likely, build a nuclear weapon, smuggle it into the United States, and detonate it near a major population center, the predicted casualty rate starts at 10,000 and climbs, in some estimates, to as high as 250,000. This would be a singular crime. But it would be a horror not unlike many that this nation has faced before and many that this nation will face again, terrorists or no terrorists. The country would go on, just as it did after the influenza epidemic of 1918 (600,000 deaths) or during the current AIDS epidemic (500,000 deaths and counting). Attorney General John Ashcroft has called terrorists “those who would destroy America,” but a successful nuclear attack would not destroy America. It would not even come close. 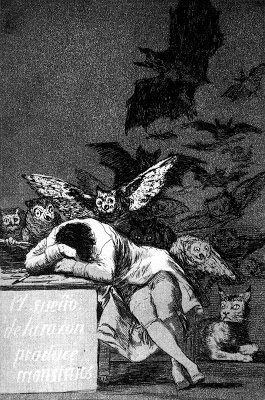 In this coming election, as in every other, genuine differences of opinion will inform much of the political debate. A tax cut in a time of recession might make sense to you, or it might not. Perhaps we should build a moon colony instead of funding public schools. Reasonable people may differ. Terror, though, will not be argued on logic or ideology or even self-interest. It will be argued on the basis of emotion. It is an emotion.

Moreover, it is a seductive emotion. Our current obsession with terrorism is premised on the fiction of an unlimited downside, which speaks darkly to the American psyche just as did the unlimited upside imagined during the Internet bubble. Indeed, this hysteria can be seen as a mirror image of the bubble, a run on terror. Whereas before we believed without basis that we could all be illimitably wealthy with no work, we now believe without basis that we will die in incalculable numbers with no warning or determinable motivation. Both views are childish, but the Internet bubble at least did not require calling out the National Guard.

Contrary to the administration’s claims, the War on Terror is not “a challenge as formidable as any ever faced by our nation.” It is not the Cold War, in which our enemy did in fact have the ability to destroy the Earth. Nor is it the Second World War (405,399 dead Americans), nor the First (116,516). It certainly is not the Civil War, still the deadliest conflict in American history (364,511 dead on the Union side, and an estimated 258,000 dead in the South) and one that specifically threatened to end the American experiment. It is not even a war in the “moral equivalent of war” sense of Lyndon Johnson’s War on Poverty. Fighting it does not make us a better people. It is much closer to the War on Drugs—a comic-book name for a fantasy crusade. We can no more rid the world of terror than we can rid it of alienation. This may sound like a splitting of linguistic hairs, but we made a similar category error in Vietnam by calling a U.S. invasion a Vietnamese “civil war.” That misidentification cost 58,200 American lives.

As opposed to terror, murder, at the hands of Al Qaeda or anyone else, is a very real threat. But it is not a supreme threat, and by calling it what it is we can recognize that it does not require the wholesale reorganization of the American way of life. The prevention of murder does not require the suspension of habeas corpus, nor does it call for the distribution of national identity cards, nor does it require the fingerprinting of Brazilian tourists. Preventing murder certainly does not require war, which of course is quite murderous in and of itself. What preventing murder requires is patient police work.

In New York City we have a program called Comstat, in which police carefully track various crime statistics, detect anomalies, and marshal their forces appropriately. It works. There were 596 murders here in 2003, down from 2,245 in 1990. This sort of effort lacks election-year grandeur, however, which may partially explain why the Department of Homeland Security does not bother to track the number of Americans killed by terrorists. (The FBI tracks terror fatalities within the United States and the State Department tracks the same abroad, but each uses a different definition of terrorism and neither has domestic numbers beyond 2001.) Similarly, there is no comprehensive watch list of likely terror operatives. What we have instead is a sophisticated public-relations system, the color-coded “Homeland Security Advisory System,” that works to terrify Americans without the grisly work of actual terrorism.

Many desired activities, from shopping to watching television, have been cited as examples of what we must do, or else “the terrorists will have won.” This is debatable. What is not debatable is that if the American people are terrified the terrorists have won. And, in this regard, they will have been working with the full cooperation of the current administration. ■